Frank Shorter was born October 31, 1947 and is a former American long-distance runner who won the gold medal in the marathon at the 1972 Summer Olympics. His victory is credited with igniting the running boom in the United States of the 1970s.

Frank Shorter was born in Munich, Germany, where his father, physician Samuel Shorter, served in the U.S. Army. He grew up in Middletown, New York. After earning his high school diploma from the Northfield Mount Hermon School in Gill, Massachusetts in 1965, Shorter then graduated from Yale University in New Haven, Connecticut with a bachelor of arts degree (B.A.) in 1969, and the University of Florida College of Law in Gainesville, Florida with a juris doctor degree (J.D.) in 1974.

In the October 2011 issue of Runner’s World, an article by John Brant detailed the traumatic household life Frank and his siblings suffered at the hands of his father and the buckled end of his belt. While his father enjoyed great prominence in his community, his behavior may have reflected, “a profound narcissistic personality disorder” according to Barbara duPlessis, Frank’s sister. With the publication of the Runner’s World article, Mr. Shorter will begin to elaborate on stopping similar cycles of violence in more detail and in public.

After graduating from Yale, Shorter chose to pursue a law degree at the University of Florida in Gainesville because of the excellence of the environment and the opportunity to train with Jack Bacheler as members of the Florida Track Club (FTC) founded by Jimmy Carnes, then the head coach of the Florida Gators track and field team. Bacheler was, at that time, regarded as America’s best distance runner, having qualified for the finals of the 5,000-meter race at the 1968 Mexico City Olympics. The FTC’s core nucleus of Shorter, Bacheler and Jeff Galloway qualified for the 1972 Olympics and their success made Gainesville the Mecca of distance running on the East Coast in the early 1970s.

From 2000 to 2003, Shorter was the chairman of the United States Anti-Doping Agency, a body that he helped to establish.

Shorter was featured as a prominent character, played by Jeremy Sisto, in the 1998 film Without Limits. The film follows the life of Shorter’s contemporary, training partner, Olympic teammate and some-time rival Steve Prefontaine. [10] Shorter was the second to last person to see Prefontaine alive before he died in a car wreck. 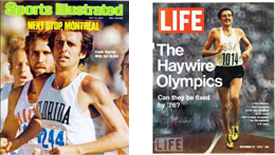